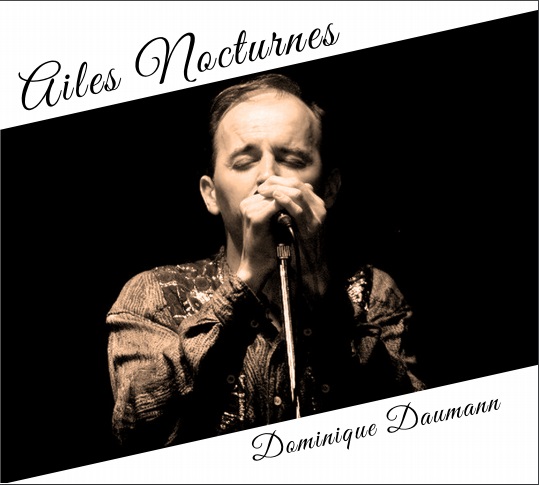 Dominique Daumann is a franco-german songwriter/singer and the previous frontman of the bands Resonance and Asilah that have published four critically acclaimed award-winning albums. Now he is making a comeback with his first solo album “Ailes nocturnes”.
Ailes Nocturnes is a mix of pop and chanson, characterized by a harmony between the singer and his musicians.
The album lists catchy songs such as “Colline” and “Ouh je t’aime” , but also melancholic ballads like “Nuit du Nord” and “Mes Amis”.
The saxophone track “Fantomas” gives the album a humorous touch.
Ailes nocturne” tells the story of an Amazonian tribe . This track is a hymn to life on our beautiful planet.
„The authors also addresses daring subjects that the listener can identify with. “Sans issue” stands for painful breakups, “ma rue talks about childhood fears and “Constanze” is a story about new love.
Brilliant guitarist George Guy joins the production.
Dominique Daumann’s first solo album is surprising, enchanting and most importantly beautifully human.
The album, distributed by Yeti Music/Inouie Distribution, will be available worldwide soon.